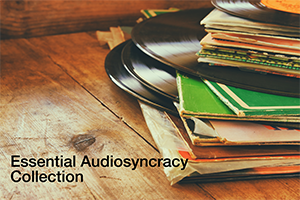 In the earliest days of Audiosyncracy, I was just becoming “plugged in” to the stream of music flowing from the promoters and artists who were finding out about my show. It was–and still is–exciting to open the packages that appeared at the station and in my mailbox when I started reaching out to this great community.

In early 2001, I opened a package that turned out to be special. Inside it was Scott Hartley’s CD, Ancestral Crossing. When I first listened to it, I knew it was unlike anything I’d heard before and, in fact, it inspired me to start the “best of…” compilation show I do at the beginning of each calendar year and, eventually, this Essential Audiosyncracy Collection.

What struck me first was how beautiful all the arrangements were. Scott’s piano flowing seamlessly around the strings and percussion in “Legend of Rain;” the flute in “Daybreak” and the violin in the title track. It’s the epitome of what this genre is to me. It’s an uplifting album and never fails to boost my spirits when they’re flagging.

The piano itself flows naturally and doesn’t overpower the arrangements. There’s a delicate quality to it, such as on “The Gift,” one of my favorite tracks.  On “Common Ground,” the piano leads but the sax follows gracefully and the conversation isn’t one-sided at all. “Mount Vernon” manages to be majestic and understated at the same time. You can sense a wistful quality of remembrance on “My Old Playground” and it sounds almost like a holiday track at the same time. There’s a commonality of theme that seems to bind these tracks together in a way few other artists manage to do.

I don’t know what became of Scott Hartley. Ancestral Crossing was the only album I received from him, but I wish he had released more music. It was amazing. While you can still find it on Amazon,  it is not available anywhere else that I can find.